The last post of this year. Wish you a good start into 2010!
1 comments
Labels: hdr, landscapes, missouri

Is it two weeks already? I cannot believe it. What did I do all this time? I remember what I did on day 12: nothing. At least I didn't drive anywhere, which was good for a change. I figured out that there is nothing better than an outdoor jacuzzi after long days of driving. While I was sitting in there I thought about founding my own church. One that worships heated outdoor whirlpools. However, I'm pretty sure you don't want to read about this.
In the morning of day 13 I was undecided between staying in the area and drive the Apache Trail, or moving on and drive a bit of the Historic Route 66. I decided to move on. Too bad it is winter. The sun sets too early, and once it's dark there is not so much to see anymore. That's when I switch from slow sightseeing to driving in tunnel-vision mode. I don't wanna know how many interesting things I passed by at night without noticing. It has one good thing to it: I reached California. This town is as empty as it looks right here. I walked around there for about 45 minutes in the early evening and saw maybe eight people. Including one homeless guy who for some reason liked my jacket very much. The last three days I have been at several places in New Mexico and Arizona. The main stops were:

The Very Large Array was a very nice treat between all the dull driving. Roswell in my opinion was a wasted day. In one of the Motels I stayed I had breakfast and chatted a little with this older lady that took care of the buffet. When I asked her about Roswell she made these big eyes and just whispered "it's different!". At that point I decided to check it out, but as it turned out, there isn't really much to see - unless I missed something. Okay, there is the UFO museum, But it looks like it hasn't been updated in any way since the 1980s. Maybe that's what she meant. The whole town seemed to got stuck 15 years ago. But that's not even much compared to many other parts of New Mexico. The most entertaining thing in Roswell was watching the History Channel with a documentary about ancient aliens. But you really don't need to drive all the way to Roswell to watch the History Channel. It was just a coincidence that this show was on.

White Sands on the other hand is a really interesting and photogenic place. I managed to get up very early and be in the park before anybody could pollute the landscape with their footsteps. Results will follow soon.

A couple of hours ago I arrived in Phoenix. Before that I explored some scenic back roads here in Arizona, and ran into a border patrol checkpoint. It's funny: a scene you usually only know from the airport took place there somewhere in the bushes. I had to show my passport and got my whole car X-Rayed. A guy from Germany with a car from New Jersey packed with boxes and suitcases somewhere in the landscape of Arizona? I would scan him too if I would be border patrol. I would scan him twice.

But how do you X-Ray a car? They have this X-Ray truck that they move back and forth next to it. It must be some sort of backscatter technique as they had no device for ray-detection on the other side of the car.. I asked for the image, but they couldn't give it to me.

When approaching Phoenix I saw the very first sign that said San Diego. I could basically go "home" any time now. The Cadillac Ranch at Night

Pictures from day 5 of my trip when stopping in Amarillo, Texas:
I had no clue that the famous Cadillac Ranch is located hidden in the darkness on some field. I thought it would be well illuminated and easy to find. Turns out it's a very offbeat attraction. I happened to know about this since childhood from the movie Skateboard Madness :-) So I was kind of eager to see it in real, got some directions from a nearby gas station, and without really looking for a thrill, I found myself in complete darkness. I saw some silhouettes against a remote highway, and only after walking over the field for a while it became clearer. So there was only me, the darkness, a dog barking somewhere, and ten cars sticking out of the ground. Can you imagine what a weird situation this was? Now the pictures look very colorful. In real it was just shades of gray. Thanks to two-minutes exposures with ISO 3200 all the colors came out. I hope you are having nice holidays! I photographed this little fellow in Albuquerque where I spent Christmas Eve. You might not be a big fan of the festive, but when you are alone on the road the old town of Albuquerque might be the place to be. The whole place was decorated with hundreds and hundreds of brown paper bags with candles inside. Everybody was very much in the mood. People singing, enjoying, and drinking hot chocolate (it was cold). So yeah, I definitely prefer cheesiness over a shady motel room on such a night.
8 comments
Labels: animals, new mexico, travel talk

The hide and seek with the snow is over, it finally found me in Santa Fe, New Mexico. I got up very early today to take pictures of a freshly snow covered town. Because of the weather I chose to take the bus to downtown. For my taste I arrived a bit too late. There was way too much daylight by the time I got there. Still, I spent a couple of hours hiking through the snow and listening to music. Because the music fit the scenery so well, I got an idea and started to do some sort of still-life filming. Now I would need to cut this and add this particular music. Who knows when this is going to happen...

White Christmas in Santa Fe. That was the plan, now I have to admit that I don't find this town that interesting. I might be gone before Santa Claus gets here. Just waiting for the right moment to leave - weather wise. Better late than never, here is a little post about the past two days. I spent most of the fifth day in Oklahoma. I met real Oklahomans and got some advice on what to see there. The result is the picture below: the tall grass prairie. I enjoyed this a lot. Very large open space and not a single person anywhere. The only traces of civilization are roads (not many though) and fences. Here and there a barn and some cows, and that's it. Not that I haven't seen something like that before, but you can really drive there for hours and nothing changes. And that's basically what I did.

Late at night between day 5 and 6 I reached Texas and stayed in Amarillo. Before checking in to some roadside motel, I visited the Cadillac Ranch. This is another story and worth another post.

Day six I spent driving through New Mexico up to Santa Fe. My idea was to spend a white Christmas there. The tall grass prairie of Oklahoma. What looks like a very short arm is just me being German and bending my elbow exact 90 degrees while using the remote control. Before leaving St. Louis I tried to get a better view of the Gateway Arch and went across the Mississippi to East St. Louis. Turns out that this place is something between slums and ghost town. It was very intense for me driving around there. As much as I would like to photograph such a place, as much I am alert about the fact that it might be dangerous to do so. Maybe it is not. It's basically very hard for me to estimate whether or not I'm really in a dangerous place.

Cutting through Missouri on the other hand was very nice. Nice landscape, sunset in front of me, good music...the stereotypical road trip setting. There is not much to report today. I decided to stay in my hotel in St. Louis for one more day to do some work that I took with me. The weather was too dull for pictures, but I took one of this pretty hotel. Built in 1894 it once used to be the world's largest and busiest train station. Steffi got interviewed about her photography. You can find it on Slashmaraud.
0 comments
Labels: interesting links The illuminated arch and its shadows projected onto the clouds. So far so good. I made it to Indiana, which means I reached the goal of the day and made it out of my familiar area. At the very beginning of the drive I was a little annoyed about the whole trip. Simply because of all that driving. But after leaving New Jersey, when I got a bit further into Pennsylvania, I saw the landscape changing and the sun setting. At that point the annoyance turned very quickly into excitement. At that point I started to realize what I am doing here...that I'm not gonna turn around and go back. That I'm on my own and that everything that was before is already over.
OK, before I get more sentimental, here the plan for day 2: I'll slow down. Not use the interstate much and have a look at the Gateway Arch in St. Louis. Maybe stay in that area till sunset.
3 comments
Labels: travel talk

I'll be on the road for the next two weeks. If you want to join the trip, you can always come here and see where I am. Right now I'm still in Princeton - final destination is San Diego. This is a very coarse description of the route as I haven't planned much yet. I'll try to go fast during the first one or two days until I get into more unfamiliar regions. Then leave the interstate highways and slow down. Feel free to leave comments if you know interesting places to visit that are along the route. This morning I gave a little interview about my photography. This was for what I believe to be the smallest TV station of the country. The station serves patients of St. Vincenz hospital - a place I'm exhibiting at right now.
The interviewer was very well prepared and familiar with my work. This, and the whole interview situation was a really interesting experience. Steffi was with me and took this picture. 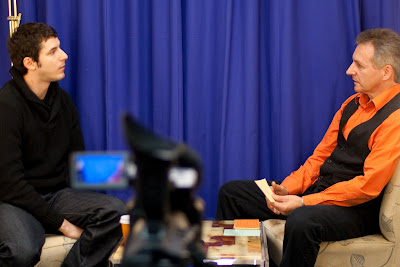 I'll post the video at some point when I have it.
1 comments
Labels: appearances, exhibitions, myself

Benches with a View Hi all, you might have noticed that I didn't post much this week. I'm in Germany right now and busy with other things - mainly with eating :-). Next week I'm returning to the US and start a two-week road trip from New Jersey to California. Most likely I will post much more then.
6 comments
Labels: bw, cityscapes, new york
Newer Posts Older Posts Home
Subscribe to: Posts (Atom)